Definition – What does Software mean?

The theory of software was first proposed by Alan Turing in 1935 in his essay “Computable numbers with an application to the Entscheidungsproblem.” However, the word software was coined by mathematician and statistician John Tukey in a 1958 issue of American Mathematical Monthly in which he discussed electronic calculators’ programs.

Programming software is a set of tools to aid developers in writing programs. The various tools available are compilers, linkers, debuggers, interpreters and text editors.

The Difference between Software and Hardware?

The terms software and hardware are used as both nouns and adjectives. For example, you can say: “The problem lies in the software,” meaning that there is a problem with the program or data, not with the computer itself. You can also say: “It is a software problem.”

The distinction between software and hardware is sometimes confusing because they are so integrally linked. Clearly, when you purchase a program, you are buying software. But to buy the software, you need to buy the disk (hardware) on which the software is recorded. 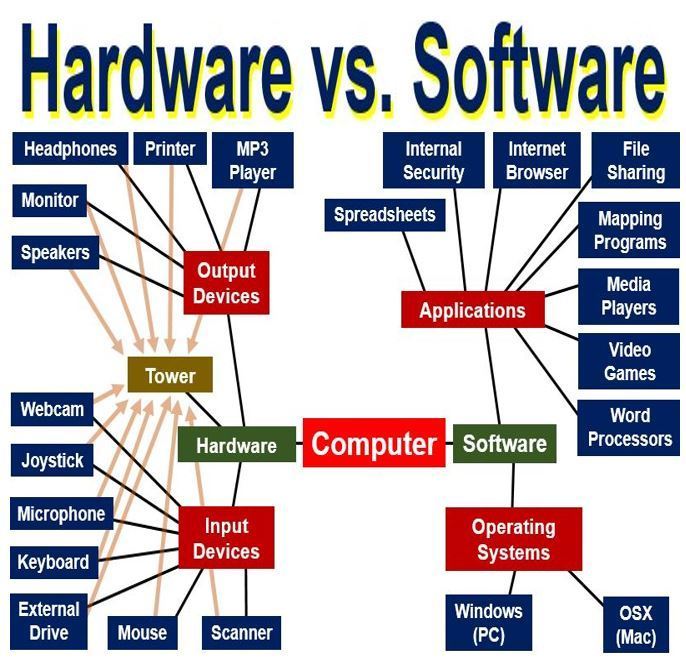 How do you get software?

Software can be purchased at a retail computer store or online and come in a box containing all the disks (floppy diskette, CD, DVD, or Blu-ray), manuals, warranty, and other documentation. Software can also be downloaded to a computer over the Internet. Once downloaded, setup files are run to start the installation process on your computer.

How do you use computer software?

Once the software is installed on the computer hard drive, the program can be used anytime by finding the program on the computer. On a Windows computer, a program icon is added to the Start menu or Start screen, depending on your version of Windows.

How to maintain software?

After the software is installed on your computer, it may need to be updated to fix any found errors. Updating a program can be done using software patches. Once updates are installed any problems that may have been experienced in the program will no longer occur.